As I study this Permaculture stuff more and more, I’m getting a better idea of just what exactly it’s all about. Permaculture can get very theoretical at times, but in short, it’s a design science based on the observation and imitation of natural systems, applied to human settlements and food production. The three core ethics of Permaculture are;
1. People Care
2. Earth Care
3. Return of Surplus 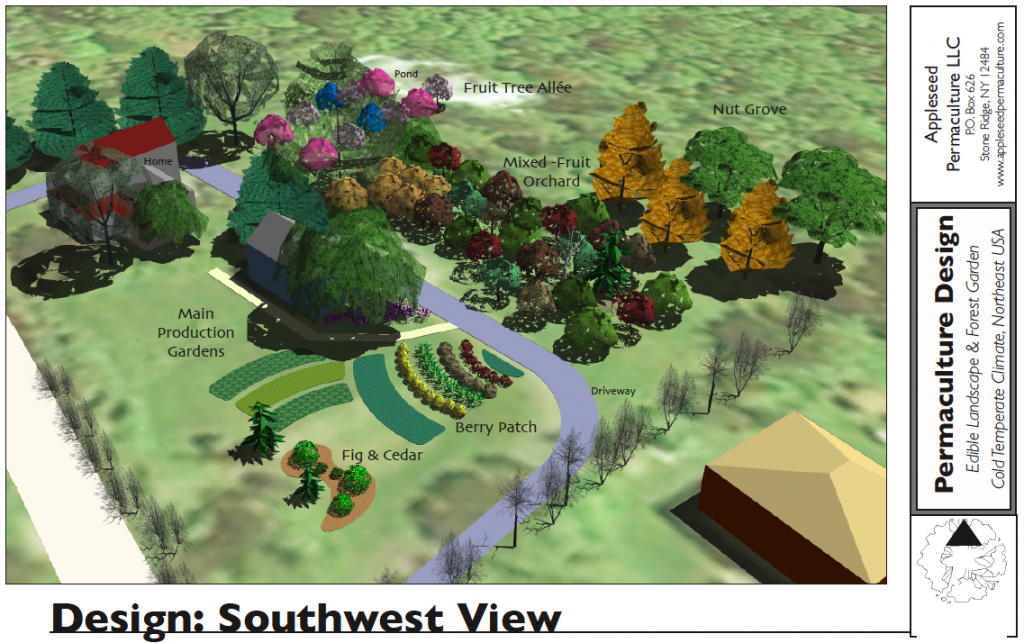 You can think of it like a holistic approach to agriculture, and human habitat design. Or put another way,  it’s designing with nature rather than in spite of her. It’s going into damaged ecosystems (areas around human settlement are almost always damaged) and healing them by planting an edible ecosystem specifically catered to our human needs. (If you like getting biblical, it’s basically like re-planting the Garden of Eden) But it also goes way beyond simply which plants to choose, and where to place them. The human element is a crucial aspect to these systems as seed bearers and ecosystem managers, so that means we’re also designing the human patterns of behavior; what you might call “Permanent-Culture.”
It reframes both our perception of and our relationship with the natural world. For instance, in the conventional point of view, if there is a squash bug problem in your squash crops you would get a pesticide to kill them. (oblivious to any health effects to self or other creatures, or to the idea of entering into an evolutionary arms race with the species) Whereas the permaculture approach would be to inter-plant your squash plants with fennel, dill, or coriander which contain the small flowers that are required by parasitic wasps which can then control the populations of squash bugs. You can think of it kind of like companion planting on steroids, including not only garden plants but birds, cows, bees, trees, soil, fungus and US! 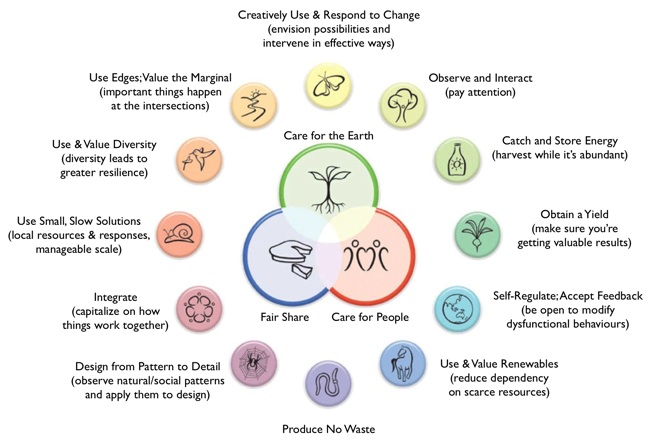 The principles of Permaculture design can apply to both small urban sites as well as industrial scale farms. But as these principles are based on the patterns of nature, their application can be about as broad as your imagination. For instance, “Use and Value Diversity” can be applied by planting many genetic varieties of a species of tree so that if any major disease or pest comes to wipe out the tree, it’s more likely that at least some of your trees will survive. You would also want to plant apples that ripen at all different times of the year so you have a more consistent supply rather than all at once. Then you could apply this to valuing a diversity of individuals and belief systems within your human culture, since a great variety of perspectives allows us to expand our own points of view, challenge our commonly held assumptions, and perhaps come to understand the world in a new way.
The “Permanent” part of Permaculture derives from that fact that we aren’t just designing systems that will last as long as non-renewable resources do (such as fossil fuels), but by being connected in to the ever-renewing systems of nature, they can persist for many generations and ideally, indefinitely. Unfortunately, pretty much the entire modern industrial model is dependent upon abundant cheap energy, mostly in the form of oil. 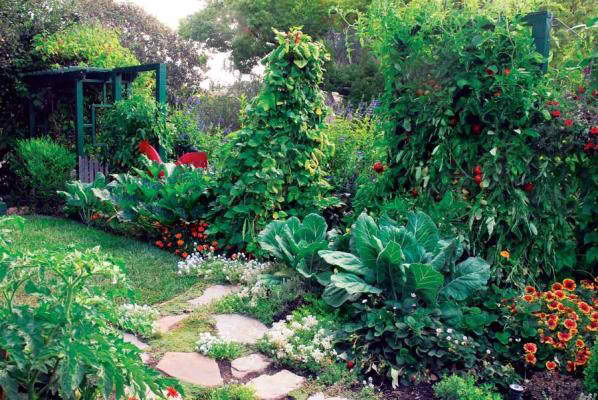 So to zoom out a little and look at some of the implicit patterns in this approach; there is a focus on small and slow solutions, instead of buying the “quick fix” provided by industry. We also focus on the relationships between elements of the ecosystem more than the elements alone. It’s seeing these things as a highly self-organizing system, instead of a collection of discreet objects. In fact, it becomes clear that the very identity of each element, including ourselves, is forged from the interactions of our many relationships; our relationships make us who we are. In my few years, I’ve learned that relationships are a give and a take, and recently our relationship with the natural world has been a take-take-take. Such relationships are not healthy and will not last.
Yet with the power of our combined knowledge and experience, as well as a shovel and a seed, we can literally change the face of this earth for generations to come. What better way is there to use our time and energy during our short stay on this planet? Wont you lend your hands?